News From the Jews

Alright folks, I’ve got a number of news items from the Jewish press to highlight today.  Some will make you laugh, some will make you cry, but I think we can all gain a deeper insight into the nature and agenda of the organized international Jewish community simply by analyzing their own writings, press releases, and media outlets.

On June 25th, I interviewed Paul Topete of the patriotic rock band Poker Face.  Paul is the main organizer of Freedompalooza, “an annual festival committed to the fight for freedom by exposing the truth by means of music, speakers and vendors dedicated to helping Americans be successful in restoring our Republic.”  The Jewish supremacist criminal organization known as the Anti-Defamation League, along with its partner in crime, the Southern Poverty Law Center, has been whining and crying about Freedompalooza and the “hateful, anti-Semitic conspiracy theories” which proliferate there for weeks now.

Due to pressure from both the Anti-Defamation League and the Souther Poverty Law Center, pseudo American patriots like Larry Pratt of Gun Owners of America, Stewart Rhodes of Oath Keepers, and others cancelled their speaking engagements at Freedompalooza, largely as a result of discovering Paul Topete is capable of critically analyzing history (Paul rejects the absurd Jewish “Holocaust” propaganda and historical narrative of WWII, which the ADL and SPLC brought to the attention of Pratt and Rhodes).  American Free Press appropriately ran a headline in a recent edition of the paper entitled, “ADL, SPLC working to ‘Holocaust’ July 4 Festival” to describe the tactics of the organized Jewish community and their lackeys in their attempts to sabotage Freedompalooza.

On July 2nd, two days before Freedompalooza got started, the ADL released this ridiculous press release:

The American Free Press, an anti-Semitic and conspiracy oriented newspaper pub­lished by longtime white suprema­cist Willis Carto, is the primary sponsor of an upcoming gathering of white supremacists, anti-Semites, anti-government extremists and conspiracy theorists during July 4th weekend, according to the Anti-Defamation League (ADL).

“Freedompalooza 2013,” organized by Paul Topete, an extremist lead singer of the band “Pokerface,” will take place from July 4 – 6 in Bucks County, Pennsylvania. The list of invited speakers features several well-known supporters of anti-Semites and racists, including two former members of Congress: Cynthia Mckinney, who has a history of promoting anti-Israel rhetoric, including accusing the pro-Israel lobby of sabotaging her political career, and James Traficant, who since his release from prison on federal racketeering and bribery convictions has joined the Amer­i­can Free Press, where he has expressed his own anti-Semitic and anti-Israel views. […]

How many Orwellian buzzwords (“white supremacist” or “racist” or “anti-Semitic”) did the ADL use in these two paragraphs alone?  And people who consider themselves patriots are intimidated by this sort of childish, inane nonsense?

Shame on Oath Keepers and Gun Owners of America for cowering in the face of pathetic tactics like this from the organized Jewish community.  Cowards and sell outs like Stewart Rhodes and Larry Pratt will never be an asset to the America-first patriot community.  If you want to see how truly weak and pathetic Stewart Rhodes is, read the comment he left on the ADL blog post attacking Paul Topete and Freedompalooza.  Anyone reading this who still supports Oath Keepers and Stewart Rhodes may want to reconsider.

Former Representative Jim Traficant addressed the pathetic and childish attacks coming from the ADL and SPLC during a speech he gave at Freedompalooza this year:

Former Iranian President Mahmoud Ahmadinejad certainly is not afraid of the organized Jewish community and their childish demonization tactics.  He recently announced that one of the greatest achievements of his presidency was exposing the fake Jewish “Holocaust” story as a fraud on the world stage, as The Times of Israel reported:

Outgoing Iranian President Mahmoud Ahmadinejad said during a farewell ceremony Sunday that publicizing his Holocaust denial was a major achievement of his presidency.

“That was a taboo topic that no one in the West allowed to be heard,” Ahmadinejad said in a speech, according to the Iranian Fars news agency. “We put it forward at the global level. That broke the spine of the Western capitalist regime.”

Ahmadinejad has also openly questioned the official narrative explaining the events of 9/11, which he should be commended for.  I’ve often said that the lies associated with WWII, Adolf Hitler, and the fake Jewish “Holocaust” form our collective historical paradigm, especially in the West, while the lies concerning the events of 9/11 form our collective modern political paradigm. These two Big Jewish Lies must be exposed and rejected, and Ahmadinejad has arguably done more than any other leader on the world stage in recent memory to raise awareness of these issues.  It’s no wonder the man is constantly demonized in the mainstream Jewish-owned mass media.

Speaking of the fake Jewish “Holocaust” story, which has served as a political and psychological weapon employed by the organized Jewish community against the West, as well as a financial racket for “Holocaust survivors” and other Jewish charity and relief organizations, the Jewish Telegraph Agency is reporting that Hungry will resume “reparations” payments to “Holocaust survivors” via the Claims Conference.

A friend of mine made the following photo, which I got a kick out of and I’m sure you will, too. 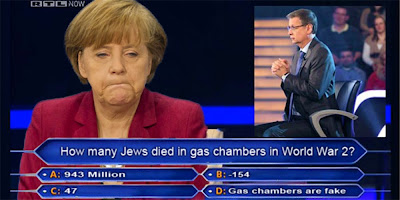 Sex scandals involving the Catholic Church regularly make headline news, and yet stories like this are kept out of the mainstream.  Any guesses why?

Mike Reck, an attorney representing the six, said his clients are disappointed they have been unable to reach a settlement with Y.U. and are poised to file lawsuits.

If the impasse continues, “the survivors have no choice but to avail themselves of the court system,” said Reck, an attorney with the New York office of Jeff Anderson and Associates, a Minnesota firm that specializes in abuse cases.

The money in the bill the committee approved Wednesday is the latest such appropriation under the 2007 U.S.-Israel Cooperation Act, which created a grant program to support research and development of renewable energy sources.

To conclude, I’ve highlighted on numerous occasions that the promotion of gay marriage and the homosexual rights agenda is entirely driven by the organized Jewish community, and always has been. The Jewish Daily Forward further documented this fact in a recent report:

A Jewish school teacher from Philadelphia is a face of a new landmark lawsuit that could prompt a Supreme Court ruling guaranteeing same-sex marriage rights nationwide.

Helena Miller, a lesbian whose wife is not recognized as a parent of their baby daughter, is one of more than 20 plaintiffs in a landmark federal lawsuit filed July 9 challenging a law that bans same-sex marriage in Pennsylvania.

The law also bars the state from recognizing such unions performed elsewhere, a provision that directly affects Miller and her family.

“We would really like for our child, when she’s old enough to understand what these things all mean, we want her to understand and see that our family is equal to any other family,” Miller told the Forward.

The new lawsuit, filed jointly by the American Civil Liberties Union and a Philadelphia law firm, is on the cutting edge of an aggressive new legal strategy aimed at pushing the U.S. Supreme Court to guarantee marriage equality across the country.

The homosexual rights movement’s ultimate goal is to destroy traditional Western conceptions of marriage, gender roles, and basic social and familial norms.  And it appears to be working.  As Andrew Anglin recently wrote in a piece for the newly launched Daily Stormer website, “These Jews are not going to stop until you make them stop, folks.”

Indeed, before you know it, the Jews will be saying pedophiles, rapists, and other sexual perverts and predators are “oppressed” and must have “equal rights.”  That is where this agenda is going – it’s time to stand up and say no.

Prepare for the Apocalypse

The Complete Retard's Guide to Bitcoin

This is a reader funded site. It is the most censored publication in history.

We here at the Daily Stormer are opposed to violence. We seek revolution through the education of the masses. When the information is available to the people, systemic change will be inevitable and unavoidable.

Anyone suggesting or promoting violence in the comments section will be immediately banned, permanently.